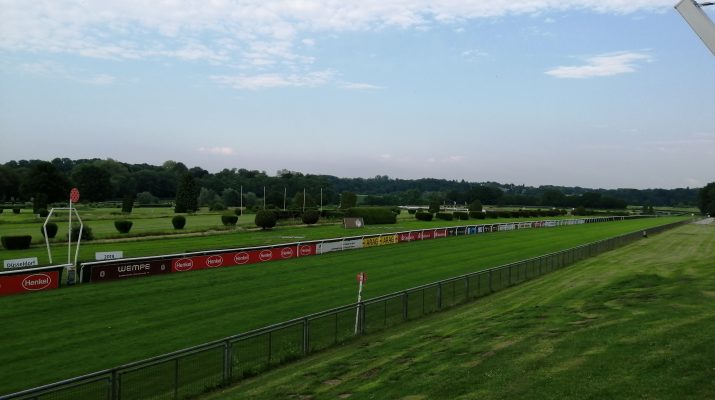 At the beginning of June 2019, we were honoured to be receive an invitation from the British Consul-General, Rafe Courage, to attend a reception for Her Majesty the Queen’s birthday, in Düsseldorf.

We travelled to Düsseldorf entirely by public transport: bus, RailAir coach, flight and S-Bahn.  As usual the trip took about 6 hours door to door. When we left Reading the temperature was 11C; when we reached Düsseldorf it was 31C!

We went to the hotel we had booked (Hotel Batavia, Bahnstrasse 61). It is a 3-star fairly basic hotel close to the station. After settling in, we took a taxi to the venue: the race course in the north-east of the city. It is a very beautiful area which we had not visited before. In that weather particularly, we did not fancy walking a bit over a mile in smart clothes from the nearest tram stops.

The reception was in the Teehaus of the racecourse, overlooking the finishing post and was attended by about 200 people, mostly from the local German and British business communities. This included, of course, the Consul-General Rafe Courage and his wife Theresa. Mr Courage said that despite the cancellation of his intended visit to Reading, in March, he would very much like to do a talk for us in Reading at a future date.

Other familiar faces included Dr Bettina Blum of Paderborn University, who organised the exhibition “Die Briten in Nordrhein-Westfalen which we visited in May, Dr Christel Jenkner, vice-chair of the Düsseldorf branch of the Deutsch-Britische Gesellschaft, Revd Stephen Walton, pastor of Christ Church Düsseldorf (the Anglican church) and Jayne Mulcahy-Roth of KPMG and the British Business Club.

We also made a new contact with Sheila Brass of the International English Library. She is interested in establishing contact with schools that have links between Reading and Düsseldorf – something that we shall follow up!

During the reception, speeches were made (in German) by the Consul, the Minister for External Affairs of the Land Nordrhein-Westfalen, and the British Ambassador. They emphasised the need for friendship and co-operation whatever may happen to British membership of the EU.

After a disturbed night thanks to a ferocious thunderstorm, we met our old friend Dagmar Benedix, the next morning. Dagmar organises the Churches’ Exchange and the visits by the Orchester der Landesregierung Düsseldorf to the Reading Symphony Orchestra. As well as exchanging personal news, we confirmed that a substantial number from the churches will visit Reading in summer 2020, and that the orchestra will also be coming.

Finally, we visited the Tourist Information Office and picked up some leaflets and other items that might be of interest to visitors to the RDA Waterfest stall, before our journey home. A brief visit, but delightful, as always!