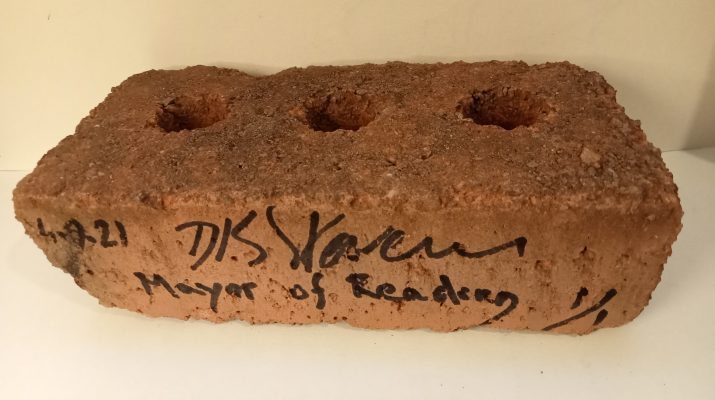 During an event at Jelly in September, the Mayor of Reading, David Stevens, was asked to sign … a brick! Exactly a month later, on Monday 4 October, he will present the very same brick to his mayoral counterpart, Dr Stephan Keller, in Reading’s twin town Düsseldorf. Dr Keller will in turn be invited to sign a brick for Cllr Stevens to take home to Reading.

The ‘Brick Exchange’ is the brainchild of Reading artist and filmmaker Matt Hulse, who suggested Mayor Stevens sign the brick during the closing event of Matt’s month-long joint residency with Düsseldorf artist Julia Zinnbauer. It’s a tongue-in-cheek nod to the German artist and lecturer at the Düsseldorf Academy of Art Joseph Beuys (1921–1986), who argued that ‘everyone is an artist’ and himself signed 200 bricks and declared them works of art.

Matt says: ‘The brick idea came to me in a flash: bricks reference Reading’s industrial heritage and Düsseldorf’s famous artist, but they also represent the solid and dependable nature of our friendship in difficult times. This exchange is a great opportunity for both mayors to enact something a bit different from the usual civic relations between Reading and Düsseldorf.’

Matt and Julia are both members of the RDA. Their residency at Jelly during August was dedicated to gathering material for a film about the Hexagon, to be completed and screened as part of the events programme that celebrates the 75-year anniversary of the RDA in 2022.

Mayor Stevens and the vice-chair of the RDA, Robert Dimmick, visit Düsseldorf in early October to attend a reception hosted by the British Consul General in Düsseldorf, Rafe Courage, to celebrate the 75 years of friendship between the German state North Rhine Westphalia (of which Düsseldorf is the capital) and the UK.