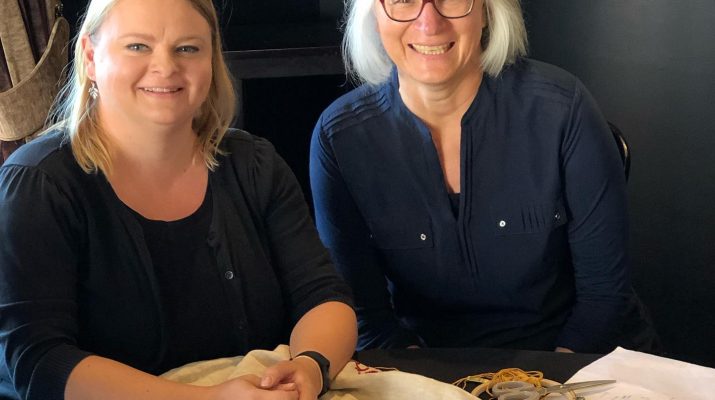 The great niece of our founder, Phoebe Cusden, recently visited Reading. Rebecca McAlpine and her husband were visiting from Canada and took the opportunity to visit Phoebe’s house at 55 Castle Street, to see the blue plaque erected there in her honour. Phoebe was also Reading’s first female mayor, so it was fitting that during a visit to Phoebe Cusden House, she was given a tour by current mayor, Councillor Paul Woodward. He was also able to facilitate a viewing of the oil painting of Phoebe from her time as mayor, in the Mayor’s Parlour at Reading Civic Centre.

The association was able to point Rebecca in the way of the Berkshire Records Centre, where she was able to view fascinating sources of information about family history. Then, as an unexpected bonus, Rebecca came upon a project run by Reading arts organisation, Jelly, to stitch a contemporary vision of the Bayeux Tapestry. And who should be mid-stitch but none other than Councillor Sarah Hacker, another of Phoebe’s successors as mayor and great supporter of the RDA. Rebecca’s suggestion that Phoebe be included in the tapestry has been taken on board!